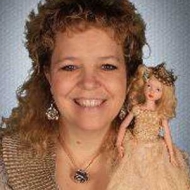 Fine art doll maker and Illustrator Elizabeth Anne Sherbaugh formerly Elizabeth Dye has been sculpting in polymer clay since 1990. She has explored the world of resin ball joint dolls and has recently done some new dolls in creative paperclay that are fully posable ball joint dolls. Elizabeth's dolls were featured on the cover of the August 2007 issue of the Doll Crafter and Costuming magazine, along with an article in the magazine on making polymer clay dolls. She has also contributed six articles to Doll Crafter and Costuming through the August 2009 issue. Elizabeth served as the Membership Chairperson and then as President of The Professional Doll Makers' Art Guild. Thank you for visiting and blessings to you!