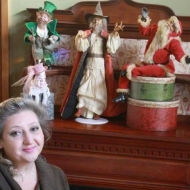 Joan Joy Tibbetts was born an artist. She draws, paints, loves fashion design, and writes stories. Born and Raised in Maine she married her high school sweetheart and had two beautiful children. She attended the University of Maine for Fine Arts. Starting her own card company using her fantasy art and illustrations in 1990 she later went on to open a store were Maine tourists could find myth and magic from the fairy realm.
After her children were grown Joan and her husband traveled the southwest where she took Jack Johnston's beginner OOAK Art Doll making class in 2006. In 2007, she was accepted into the art doll guild and completed Jack's professional doll making class.
A fire in her studio left little but ashes of more than 40 years of collective works in 2010. She has continued to strive to make new and more beautiful things by practicing sewing skills, and head to shoe construction of all her dolls. Her best inspiration however, has been becoming a grandmother.