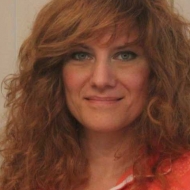 Biography:
​Elisa Fenoglio is an Italian artist, living in Turin. She graduated from the "Accademia Albertina" Fine Arts University of Turin - Italy in 1997, specializing in Scenography and Costume. Her entrance into the Italian arts world was immediate and important experience was gained in theatre, television and the cinema alongside some of the greatest directors and costume designers. She has worked for the Greek Theatre of Syracuse, the Theatre in Taormina, for the RAI Centre for Production of Turin, and for Mediaset. Over the past 9 years she has dedicated her time to drawing (she especially loves making portraits in pencil), participating in prestigious exhibitions in Italy, Germany, Czech Republic and USA (Chicago and Miami). Another of her great loves is for costume, antique clothing from past epochs which offer themselves to dolls in 1:12 miniature scale. She became IGMA Artisan thanks to this passion. For many years she dressed commercial porcelain bodies but she then decided to learn how to make the dolls herself and not limit herself simply to the costumes. Now she makes OOAK sculptures which reconcile the passion she has in shaping and creating small human figures with the ability to create miniature clothes, where the choice of materials and the combination of colors are critical to the success of a good composition. Her goals are 4 Colliii awards, 1 Dabida award, 4 winning IADR contests and entrance into the Professional Doll Makers Art Guild. Versatile and curious, over the years she has dedicated her time to teaching, scholastic publishing (through both illustrations and the correction and revision of textbooks published by Pearson Italy). Since 2010, she crafts the look and feel of the Italian annual miniature show "Miniaturitalia", through the creation of posters, advertisement posters and banners. She also dedicated herself to the design of trademarks and logos of several companies and has patented some design that have become lines of jewelery, both precious and fashion, and clothing.