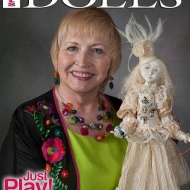 Marianne grew up in Buffalo, New York where her family has been since 1830. She comes from a long line of furniture designers, crafters and fine art painters. She was taught at an early age to sew and soon began designing clothes for her many dolls. Her art talent in high school was recognized early and additional art lessons were added to her busy schedule of figure skating, skiing, tennis, sailing and horseback riding. But it was art that held the special place in her heart. College opened a whole new world of art to her, especially her year at the Sorbonne in Paris, France. She graduated with a B.F. A. in Art and then went on to earn a M.F.A. from Cornell University. She moved to the South after college, taught for ten years, opened and operated a horse drawn carriage company in downtown Atlanta for 12 years and then returned to teaching 16 years ago. It was being a mentor teacher that led her to her discovery of polymer clay and an accidental discovery of Elizabeth Dye and one of Elizabeth’s fairy workshop that put her on the road to doll making! She is presently working in paperclay and was fortunate to participate in the Ankie Daanen Dollmaking Academy in Spain June 2014. Dollmaking she feels puts to use all of her talents including her love of beautiful fabrics! She has exhibited at IDEX 2013 and IDS 2014 and will be at exhibiting at both the Quinlan Artist Doll & Teddy Bear Show 2015 and the IDS Show 2015.