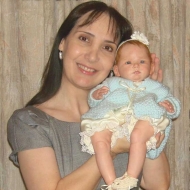 Mayra Garza was born in Monterrey, Mexico. She grew up in an extremely creative environment, surrounded by artistic activities. She learned to paint at a very early age, following the example of her very talented mother and older siblings. Her love for children led her into a career in preschool education. This gave her the opportunity to spend a lot of time observing children’s faces and their expressions.

Her love for dolls surfaced when she bought her first art doll during her twenties. Since then she has collected many more, amassing an enormous personal collection.

In 2000 she was confined to the house for a long time with trigeminal neuralgia, which is a seriously debilitating illness. It was during that period of her life that she began to develop her manual skills and knowledge of children’s anatomy to sculpt her first dolls. Ever since, she has sculpted dolls and figures of the Baby Jesus, which she sells all over the world. Also, she has made several limited editions of dolls in high quality resin.

Some of her dolls have been acquired by renowned collectors, such as Richard Simmons, Museums and members of important Nativity Scene associations.

Her dolls have also been used for psychotherapeutic purposes in Greece to help girls who have been the victims of abuse. Knowing that her dolls have helped these children gives her a great deal of personal satisfaction.

At the beginning of 2011 she joined the Russian publishing team of the magazine Pretty Toys as their resident doll specialist. Later, that same year, she took on the position of Editor for Latin America.

She has won numerous prestigious awards for her work, she has dolls exhibited in Museums, Art Galleries and also some of her baby Jesus’ are part of Important Nativity Associations and Churches worldwide. Many of her dolls have been reproduced in vinyl and resin for Important Doll manufacturers in USA and Australia.